Now this is a story all about how, Will Smith got roasted by the Twitter crowd! After the first full-length trailer for Disney’s live-action... 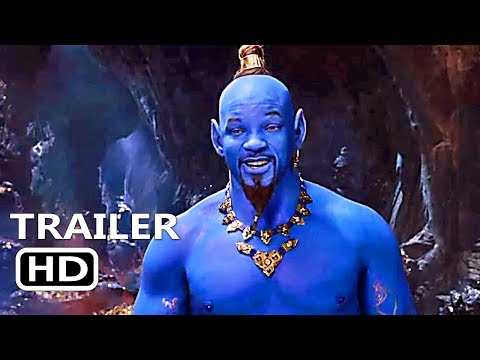 Finally See What Genie Looks Like in New "Aladdin"

Disney finally shares Will Smith's Genie! Check out the latest trailer of the live-action "Aladdin" below. It will be in theaters on May 24!

The classic '90s sitcom inspired Will Smith's take on the beloved Genie character.

Cast Of “Aladdin” Reveals What It Was Like Working With Will Smith As He Brought The Genie Back...

The cast reveals what it was like working with Will to bring “The Genie” back to life.

What The Heck Disney? Is The Genie In Aladdin Gonna Be Blue Or Not???

Remember the infamous blue dress? Is it blue and black or white and gold? Well, we now have a new blue controversy on our hands and it's all thanks to Disney!

Two little girls snatched the attention of Will Smith on the red (purple) carpet at the L.A. premiere of Aladdin.

How Will Smith Made the 'Aladdin' Genie His Own

"It was the music that I saw where I could add my flavor, where I could honor the nostalgia and I could pay homage to Robin, but then also be able to add my new flavor," the actor told 'Good Morning America' on Monday.

Top Of The Morning: Aladdin Is The ‘Feel Good’ Movie We All Need

Over the weekend, Disney’s live action version of Aladdin hit theaters and broke the box office. It brought in a reported $207 Billion in it’s first weekend. Madelyne praises Will Smith…

Aladdin: Why Didn't We See Will Smith's Genie in the First Trailer?

Jacki and Jim on why Disney is saving the reveal of the live-action version of the iconic character.

Entertainment Weekly has unveiled a first look at Will Smith in costume as the Genie in Disney’s live-action “Aladdin” movie, and not everyone is thrilled with it. Smith stars in director Guy Ritchie’s update of the animated classic, alongside Mena Massoud as Aladdin and Naomi Scott as Princess Jasmine. Smith, himself a former member of Bel-Air royalty, said he is bringing a “hip-hop flavor” to the character originally voiced by Robin Williams.